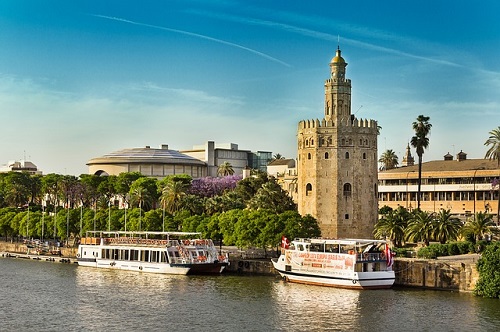 Be fully prepared for your trip to Seville with a rental car that suits your needs, gives you comfort and saves your money at the same time.

We specialise in car hire services in Seville and we guarantee to offer the lowest cost rates on car rental options in Seville. Search no more and book now! Our booking engine will get for you the cheapest car hire deals from over 550 car rental companies, powered by carhirex.com, the most trusted name for Online Car Hire.

Find Seville Hertz Car Hire, Seville Budget Car Rental, Seville National Rent a Car and so much more. Looking for a 7 seater, 8 seater or 9 seater to fit all the family on vacation through Seville? When it comes to car hire vehicles in Seville, we have it all. Your selected vehicle will be ready at your arrival to Seville Airport.

Although it is the main airport for Seville, Sevilla Airport, SVQ, it has only one terminal and one runway and handles just 4.5 million passengers per year. Also known as San Pablo Airport, it is located 10 km northwest of Seville, a very fast drive to town by Seville Airport car hire.

The design of San Pablo Airport was based on Seville's cultural roots, harking back to the traditional styles of the mosque, the palace, and the orange trees. The airport features an orange grove which greets the travelers upon their arrival before entering a hall, colored blue by the effect of the glazed roof tiles, and crowned by arches and vaults.

Seville connects with Madrid via the A4 or the E05 road network. Seville motor ways also provide easy access to Jerez, Málaga, Cádiz, Huelva, and Portugal. Set out to see the sights of Seville or this great area of Spain by car hire Seville Airport.

The Cathedral of Seville 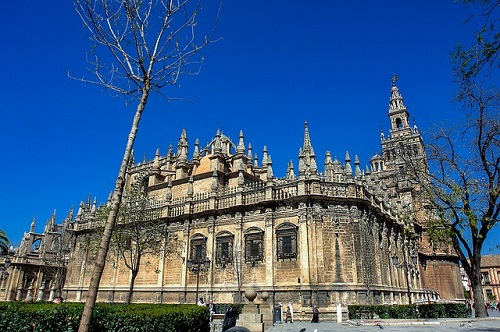 Visit the largest Gothic cathedral and the third largest church in the world and the burial site of Christopher Columbus. The Cathedral of Seville, or Catedral de Santa Maria de la Sede (Cathedral of Saint Mary of the See) dates back to the 15th century. The interior of the Cathedral features the longest nave in Spain, lavishly decorated with an abundance of gold and artistry.

The Cathedral was built after the Reconquista of Seville on the former site of the city's mosque. In construction some of the original elements of the mosque were preserved such as some of the columns, and most famously, the Giralda. Originally only a minaret, the Giralda was converted into a fantastic bell tower. It is topped with a statue representing Faith known locally as El Giraldillo, Although you will likely travel by the comfort of Seville, Spain car hire, the interior of the tower was built with ramps to allow the Muezzin and others to ride to the top on horseback. 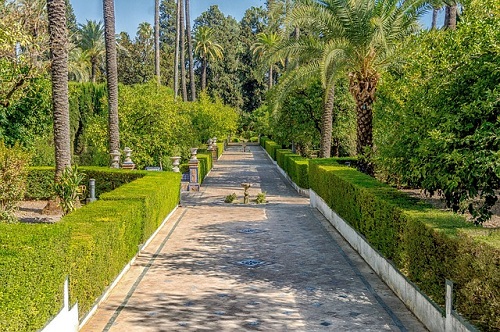 Built for the Spanish-American Exhibition of the World's Fair in 1929, when the entire southern end of the city was redeveloped into an expanse of gardens and grand boulevards. In the centre of all this was the Parque de Maria Luisa, in a 'Moorish paradisiacal style'. The park consisted of a half mile of tiled fountains, pavilions, walls, ponds, benches, and exhedras. It was lavishly landscaped with palms, orange trees, Mediterranean pines, stylized flower beds, and vine hidden bowers.

Numerous buildings were constructed for the exhibition, and among them is the fantastic Plaza de España. An example of Moorish Revival style Spanish architecture, it was a placed on the park's edge to showcase Spain's industry and technology exhibits. Its buildings comprise a huge half-circle, accessible over the moat by numerous beautiful bridges, and centered around a large fountain.Plan your visit to the park by car hire Seville, Spain, and win for the myriad of delights found here. The park was also used for some scenes in Star Wars: Episode II!

The Palace of the Countess of Lebrija 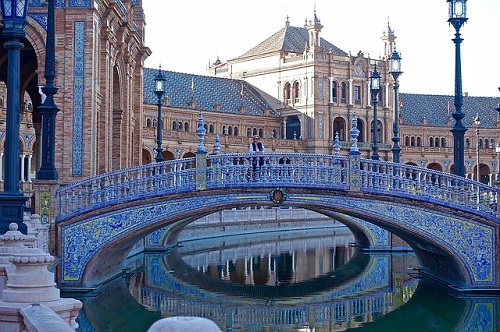 Travel by cheap car rental Seville, Spain through the city's center and stop in at this historical edifice and museum. This ornate mansion was originally built in the 16th century, but extensive renovations in the early twentieth century by the Countess of Lebrija saw many new additions.

Among its renovations are some famous and historical floors. Here the Countess incorporated various original mosaic floors that had recently been found in Santiponce, in the former classical Roman town of Italica. The Palace of the Countess of Lebrija houses the largest collection of such pavements.Also from the ruins at Italica, the Palace is decorated with rescued furniture, sculpture, pottery, and other items. It houses many eclectic decorations, including neo-Mudéjar touches, portions of convents and older palaces, and some traditional Sevillian azulejo tiles.

By using the services provided on this site, you are entering into the terms and conditions and privacy policy of our booking partner Car Trawler which you will be asked to agree to when you book a vehicle.